A fairy tale, happily revisited, both devouring and revealing. Each pig has its own different gestures, age and house. The dancers build their performance in the same way that the pigs build their houses: with varying degrees of care, desire and brutality. They support each other, confront each other through the differences in their movements and grow up together…

By their side, a narrator appears in the form of a dark, voracious rock ‘n’ roll she-wolf. She is also the helper, who pushes for progress and improvement in the face of the pressure of the world.
Conceived as a game, this is a lesson in how to live in your own house and a parable of self-construction. It all comes down to a choice between the two principles of pleasure and reality. Does living in a sturdy, impenetrable house come with the risk of being trapped inside?

The moral of The Three Little Pigs is often seen as being rather sad. It tells us that we should start building with sturdy bricks as children, or else the world will swallow up our youth and our joy, just like the wolf devours its careless victims. Straw and wood are not good enough.
But if the bricks are too sturdy and our lives too careful, we might just end up trapped by our own caution.
Our body is a house. So how can we be solid and strong enough inside to face adversity? I wanted to see the dancers construct their dances like the three little pigs build their houses: with varying degrees of care, desire and brutality. At the same time, they support each other, confront each other through the difference in their movements and grow up together. But then… who is the wolf in this story? Rather than a mere predator, I wanted this saboteur to also be the one who helps them – and sometimes forces them – to progress and to better face the pressures of the world. But this demanding, sometimes strict wolf is not easy to please! He is like a parent, a master or a stage director who destroys only to clear the way, to enable strength, freedom and independence: solid and flexible at the same time.
Marion Lévy

“50 minutes of mischievous charm for the little ones and the grown-ups.”
Webthea – Caroline Alexander – January 2012

“Marion Lévy’s performance is energetic and together with the pop songs (with one by Piers Faccini), the whole thing is enchanting. In no time, we get carried away by this adaptation of the tale, because this is an adaptation that comes with a meaning. Marion Lévy deals with actual social issues in her show.”
Scèneweb – Stéphane CAPRON – January 2012

“A show for grown-ups and little ones! From our wild to our domesticated sides, DANS LE VENTRE DU LOUP explores and questions our desire for references and comfort.”
La Muse – Isabelle Calabre – January 2012 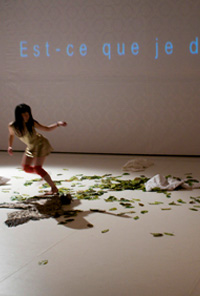 Dreams, nightmares, insomnia, fear of the dark and of loneliness, well-being… En Somme! explores the line between the conscious and the unconscious, the visible and the invisible in our life. The choreography translates the small movements that accompany our sleep and reveals the animality that comes out as our consciousness is at rest. Beginning with the scientific in order to achieve the poetic, En Somme! is conceived as a sort of private laboratory, as a journey through the different states and disorders of sleep.

My desire to focus on the subject of sleep comes mostly from my own difficulty in falling asleep. Meeting with the doctors at the Centre for Sleep at the Hôtel Dieu (Paris, France) and consulting the archives of the hospitals in Paris made me realise the evocative and artistic potential of this topic. Choreographically and theatrically translating sleep disorders became the starting point of En Somme!
Fabrice Melquiot turns the scientific into poetry. From “how to fall asleep?” to crazy dreams, the dancers and actors travel through the different states of sleep.
In a white space, the choreography explores the line between the visible and the invisible and the conscious and the unconscious. It transcribes the small movements that accompany our sleep and reveals the animality that comes out in our dreams and nightmares. It’s a way of talking both superficially and profoundly about the universal nature of sleep, but also about the very peculiar and personal bond that each of us has with sleep.
Marion Lévy

“Marion Lévy decides to turn her insomnia into subtle choreography. Rather than Fabrice Melquiot’s text, it is the body language itself, curled up in the dancers’ sleep, which is enchanting. (…) En Somme! combines science and play in constant motion.”
Les Inrockuptibles – December 2008 – Philippe Noisette

“In En Somme!- a beautiful performance which is as evanescent as a dream and considerably more pleasant than insomnia- Marion Lévy has created a choreographic and dramatic cycle around the rhythm and the structure of the different stages of sleep.”
“The text, fine and fitting, is produced by the writer Fabrice Melquiot (…) En Somme! becomes an enlightening truth.”
Télérama – 10th November 2010